By Laura Spencer
In Computer Skills, Mac
Posted May 9, 2018

If you use a Mac for business, you need to keep it secure. Even if you use your Mac for personal use, if you do a lot of financial transactions online, you may still wish to protect your computer. Here’s what you need to know about antivirus software for the Mac.

The number of malware and virus attacks has increased in recent years. According to a recent McAfee Labs Threat Report, which researches and compiles threat statistics based on a sample database, there were over 700,000 incidents of Mac Malware attacks in the fourth quarter of 2017 alone. The findings were confirmed by a number of other antivirus software labs including Sophos labs, which predicts significant continued efforts to infect Mac computers in the coming year.

This is a complicated question and there’s no one answer.

Conventional wisdom has long held the Macs are secure and don’t need antivirus software. Many people would say that this is still the case. While it’s true that historically Macs have been more secure than PCs, the risks for Macs are increasing.

Macs are more secure than PCs due to their Unix-based operating system, which makes it more difficult for a virus to infect a Mac. Also, OS X 10.7.5 and later includes a default Gatekeeper security feature that’s meant to keep users from downloading software from untrusted sites.

But malware is getting more aggressive—even for Macs. Some common type of threats to computers are:

While attacks on Macs are still less common than attacks on PCs, some of these threats are now targeting Mac operating systems. A common way for a Mac to get infected is by downloading software that contains malicious code from an unverified or untrustworthy source. Even though the newest versions of macOS have the Gatekeeper security feature that’s meant to protect you from downloading Malware and other malicious software, that feature can be turned off or overridden. The effects of being infected by malware range from a loss of use of your system to data loss to simply slowing your system down.

With all this in mind, you should make your decision about whether to use antivirus software on your Mac carefully. In my opinion, if you’re using your Mac to run a business where you store sensitive data that could be compromised, or if your business would suffer if your Mac became unusable, then it’s better to be safe than sorry. The answer as to whether you need antivirus software is probably “yes.”

Let’s take a look at some of the best antivirus software for Macs. Most of these packages will work well for solo professionals or small to medium businesses. Several of these software companies also offer security software for larger businesses.

Note:Many of these companies offer both Mac and Windows antivirus software, however, the focus of these overviews is on the Mac software.

Sophos offers antivirus protection software for both PCs and Macs. You can try the antivirus protection before you buy through a free trial. There’s also a business level that includes firewall protections, secure Wi-Fi, and more. Plus, you can download free security for iOS or Android devices and other free tools.

There’s also support via chat and email. If you start with the free trial version, however, be sure to upgrade or choose another type of Mac antivirus protection before the end of the trial period as some features expire when the trial period ends.

This antivirus software for the Mac uses a feature called Safe Files, which monitors important folders, to prevent ransomware attacks. Another feature, called Time Machine Protection, keeps malware from affecting your backups. It also promises fast scanning that won’t negatively affect your Mac’s performance or speed. It’s also designed to protect you from both malware, including made-for-Mac malware, and adware.

Kapersky Internet Security for Mac antivirus software has some nice features that could be useful to business owners and individuals alike. For example, it increases your system security when you’re engaged in online banking or making online security. This could be helpful for small internet-based businesses that rely on online transactions.

In addition, this Mac antivirus software claims to protect your identity by guarding your personal data—which is nice if you’re worried about identity theft. Other protections include blocking trackers, protection from dangerous websites and phishing attempts and more. Like many antivirus tools, it offers a free tool for the Mac—a virus scanner. And you can download a free trial of the software.

Choose between a wide variety of Antivirus for Mac options. And because this is the company that also markets LifeLock identity theft protection, you can purchase a bundle that includes identity protection. Other bundles include Antivirus software and Norton Wi-Fi Privacy—software you can use to protect your privacy when using public Wi-Fi. You can also download a free trial if you’d like to try the antivirus protection before you commit to it.

The Basic level package doesn’t seem to include Mac Antivirus protection, so the lowest level protection you can go with to protect your Mac would be the Standard level. Even at that level you get real-time protection from threats like ransomware and viruses. A nice benefit is that Norton offers a guarantee that they’ll help keep your device virus-free or give you a refund.

A plus for this Mac antivirus software is that all three products for the macOS include free support. Free 30-day trials for some products is also available.

With Trend Micro you can choose between two levels of antivirus protection for Macs—the most basic level is pictured above. The basic level includes protection from ransomware, email scams, and fixes/optimizes your system. It also secures your privacy on social media.

The maximum-security package includes all of the above, plus it manages your passwords and secures your mobile devices. If you’re not sure which one is for you, you can download a free trial version. 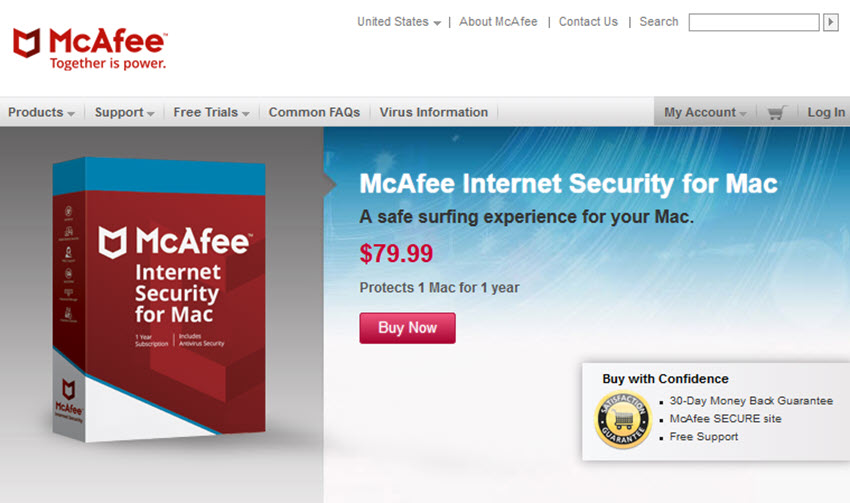 Plus, you get a 30-day money back guarantee and access to free support. Like many antivirus software packages, McAfee offers some free Mac Antivirus tools you can download including a Crypto Ransomware File Decryptor tool and Lock Screen Ransomware tool.

How
to Keep Your Mac Secure

Mac Antivirus software is just the first step in keeping your computer secure. Whether you’re using your Mac for personal use or business use, your information is important. The following actions can help your Mac to be more secure:

Back important information up regularly. Also, store backups securely—cloud storage can be a good option.

Make sure to follow good password creation guidelines. Avoid using passwords that can be easily guessed such as the name of a family member or the street you live on. Also, don’t use the same password for every login. Make sure that your passwords use upper and lower case letters, numbers, and symbols. Finally, change your passwords regularly.

Where it’s available use two-step verification. Two-step verification requires you to provide more than just a password to access your information. Typically, you’ll be sent a code through email or text message after entering your password.

It’s becoming popular for Wi-Fi to be available almost anywhere. But not all of those public Wi-Fi connections are secure. Even worse, criminals sometimes set up fake Wi-Fi hotspots in public locations for the sole purpose of gathering your information.

Software and operating systems are updated for a reason. Sure, sometimes it’s to introduce new features, but often the main purposes of updates is to patch security vulnerabilities. If you don’t update your OS and software, you could be leaving yourself open to a cyber-attack.

Make use of the macOS Gatekeeper security feature, don’t bypass it. Be cautious about downloading software from companies you’ve never heard of—even if the software is free. Likewise, be careful about clicking on links in emails you receive. Look for reviews on the software that you’re planning on downloading to see what experiences others have had with it. If the software checks out, make sure that the website you’re going to load the software is the legit site and not a fake.

7. Use Antivirus Software for Macs

In this article, we’ve explored the importance of protecting your Mac. We’ve shared some of the best antivirus software for Macs. We’ve even listed some Mac antivirus software that’s free of charge. There’s no reason to let your Mac go unprotected any longer.