In technology, you’d be forgiven for thinking that all good ideas originate in Silicon Valley, San Francisco. That’s not the case. You may have heard of Silicon Roundabout, London, or even Silicon Glen in Scotland.

An A-to-Z of German Software Developers—Part 1

What may come as a surprise is the number of digital technology companies and app producers in Germany.

To get myself in the mood, I streamed a copy of Kraftwerk’s Computer World (Remastered from the 1981 original) via iTunes, whilst I got to work on this article.

In the context of some of the apps, being developed in Germany, it’s useful to know that Germany has the strictest data protection laws in the European Union.

The German Federal Data Protection Act is known as Bundesdatenschutzgesetz or BDSG. The BDSG laws were reformed significantly in 2009 to cover a range of data protection-related issues.

The key principles of the 2009 amendments state:

A Color Bright, or ACB, is a German company with interests much like Apple itself. ACB operates in music, media, technology and the arts.

ACB works with the likes of Ableton (another German firm in the music space), Nike, RCA and Red Bull, amongst many other clients, innovating and inspiring customers.

The video above is of the Ableton Push, a device that looks so interesting I wish that I was in some way musical as I’d love to have one of these to play with. ACB collaborated with Ableton to design the user interface.

They say that running their own ventures gives them new perspectives on what it takes to be successful in digital. To be fair, these two apps are something that any developer would be proud of in their own right.

Founded in 2006, Algoriddim creates world-class music and video applications across both desktop and mobile devices.

Algoriddim’s mission is to remove the boundaries between consumer and professional-level software so that any person can be an artist in bringing their digital creativity to life.

Algoriddim’s hugely popular app djay has been demonstrated at Apple Keynote events and the firm collaborates with artists such as David Guetta, Snoop Dogg and Armin van Buuren.

The video, above, shows Juicy M—an electro and progressive house DJ and producer. She’s the first artist to perform with four iPads and djay.

Founded, in 1986, Electrical engineer Tjark Auerbach and a partner set up IT company H+BEDV Datentechnik in Tettnang, Germany, on the shores of Lake Constance, between Austria, Germany and Switzerland.

In 1999, it made available its antivirus product to download at no cost for non-commercial use, thus making it a pioneer of the freemium model.

Based in Munich, Azurcoding creates software for iOS and Mac. Since ProPlayer, in 2011, it has gone on to create a number of apps including Starglobe and XFitness.

ProPlayer is a video and audio player for iOS that supports almost every file format. Starglobe allows you to point an iOS device at the sky and see stars, planets, galaxies and constellations. XFitness is a workout and tracker guide with over 400 exercises with custom plans based on your own goals.

Winners of numerous Apple Design Awards, and apps featuring in the App Store Apps of the Year list, Boinx apps include iStopMotion, FotoMagico and mimoLive (BoinxTV).

Founded in 2011, Secomba GmbH is run by a team that focusses on data security in the cloud and is known for its flagship product, Boxcryptor. 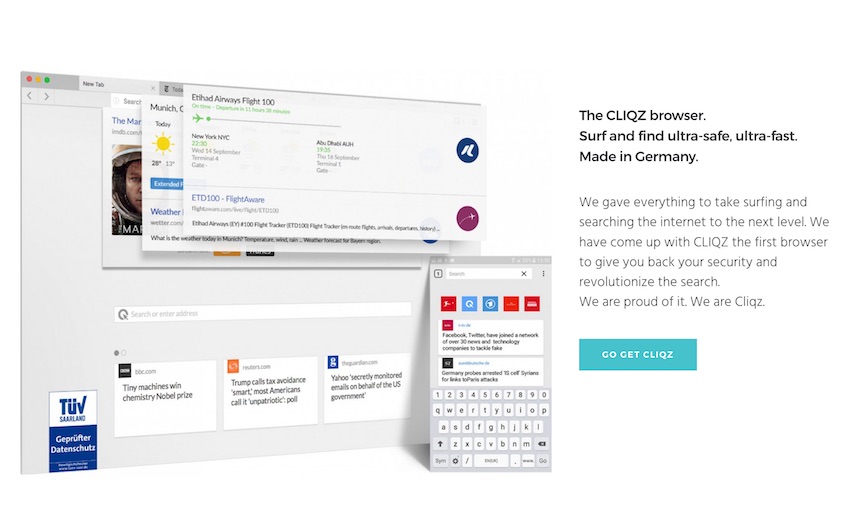 Jean-Paul Schmetz founded Cliqz GmbH in 2008 with the mission to redesign the Internet for the user by combining the power of data, browser and search.

Cliqz operates from Munich with 114 experts from some 31 countries, developing browsers and browser extensions with search to protect the privacy of the end user.

Cliqz launched its own browser, for Mac and Windows, with integrated anti-tracking, in March 2016 soon followed up with apps for iOS and Android.

Deckset is a simple way to create effective presentations. It enables you to create on your ideas and the message you wish to convey without being distracted by designing slides.

A Mac app, Deskset uses Markdown syntax to allow you to get the message out quickly. It’s not aiming to be a replacement for Apple’s Keynote (or Microsoft’s Powerpoint, if you insist on using that), it’s a simpler, faster way to create presentations with a lightweight tool.

Flo Gehring is an independent developer from Kempten who develops for iOS and the web, developoing Krümel and Memories.

Krümel, German for Crumb, is a pregnancy progress tracker. It shows the correct number of weeks (+ days) and the month. There’s even a percentage, so that Daddy will get it, too.

Memories counts days, weeks, months, years since significant events so that you can be reminded and reminisce. It doesn’t just tell you how much time has passed since those very special days, it helps shorten the wait for upcoming events, too.

Glyphs is a project of Georg Seifert, a type designer and software developer, based in Berlin.

Glyphs and Glyphs Mini are easy and affordable solutions for casual font design and dingbat webfonts. Glyphs Mini lacks the advanced features and full power of the pro version, Glyphs, it is an easy start into the world of type design.

MOApp is a small software developer, Michael Goebel, who is focussed on creating clean, easy-to-use software from his Berlin headquarters.

So Far, So Good

In the first part of this two-part series, I’ve covered some of the innovative German software developers and technology companies some of whom you’ll know and some of whom you didn’t realise were German.

In the second part of this series, I’ll cover some more German developers and tech start-ups that should be on your radar.