Mac users are fortunate in that they are spoiled by a large number of enthusiasts and developers writing high-quality apps to enhance their computing experience. But there are some duds out there.

How to Discover the Best in Mac Apps

In this tutorial, I’ll show you some different ways of finding the right app for your needs.

This might depend upon your age and/or how you’ve embraced the internet era. For many, a paper copy of information is easier to handle and easier to read than the digital equivalent. And it doesn’t need a battery.

That said, in the age of the Internet, traditional magazines are finding it tough. Most now offer a digital version and others have closed down completely.

Digital is easier and cheaper to distribute than paper; digital looks set to win this battle.

Ever since the days of PRESTEL, developed in the late-1970s, my father has been talking about all of our news and entertainment coming through a single cable to the home; the fact that we won’t buy newspapers in the future.

Since the launch of the iPad, in 2009, we’ve been living in the future. Or, at least, starting to. I’m not sure that any electronic device properly or adequately replaces a newspaper or magazine and the latter don’t run out of battery charge.

Whether or not magazines are living on borrowed time or not, there are some excellent specialist Mac magazines available. They’re a good source of information and a means of keeping abreast of new software available for the Mac.

MacFormat is theUK’s number one Apple magazine for Mac, iPad and iPhone owners.

It is aimed at leisure-oriented Mac usersand Apple enthusiasts providingthe latest reviews of Apple hardware and Mac/iOSaccessoriesand software.MacFormat iswritten in plain English and, through its writing, aims to conveyessentialinformation fastto ensure readers take away new skills and solutions each time they pick up the mag.

A good source of information about new Mac software and how to use it.

MacFormat is currently available in both print and digital formats.

iCreatebills itself as,“the creative magazine for those with a passion for all things Apple. Covering the entire Mac platform, as well as iPhone, iPad and Apple Watch, it’s packed with expert reviews, tutorials, features and guides.”

iCreate is currently available in both print and digital formats.

Comprising 12 digital-only issues per annum, Macworld is compiled by an international team of experts offeringinsight and invaluable step-by-step guides to help you get the most from Apple equipment.

The magazine also includes reviews of the latest hardware and software for both the Mac and iOS devices.

Previously in print, MacWorld is now available in digital format only.

MacUser, originally published every fortnight,was a monthly computer magazine published by Dennis Publishing Ltdin the UK. It ceased publication in 2015.

The magazine was predominantly aimed at users in the design sector and gave masterclass tutorials and expert advice on tasks such as photo-editing, design techniques and creation of movies.

Available in print and digital formats prior to its demise, MacUser backissues can still be purchased in digital form.

You’re not going to find any apps here anymore, but it’s worthy of a mention as the idea of an App Store that existed prior to the Mac App Store.

Bodega was unique in its approach to offer consumers a range of apps in one easy-to-find location.

The Bodega services will officially be shutdown on September 9th 2014. Thank you to all our supporters and loyal users!

Whilst OS X 10.7 Lion was also available on USB, a change from the previous DVD medium, this was to be the last iteration of the OS to be distributed via physical media.

The Mac App Store built upon the idea, and success, of the iOS App Store that had proved to be hugely popular with iPhone and, later, iPad users.

An independent website, as opposed to an app, macapps.link is an interesting way to install popular software, easily, on a Mac.

Select the desired apps and click to have them installed quickly and efficiently. Ideal for when you’ve just bought or set up a new Mac.

Similar to macapps.link, Get Mac Apps is another website where you select from the list of apps that you wish to install and it will install those selected apps in one go.

Again, ideal for setting up a new Mac though limited, however, in the number of and choice of apps available.

If you’re on the hunt for a particular app that does a particular thing, Alternative To is a good place to look.

It’s not exclusively Mac. And that adds to it’s usefulness.

It’s a great place to find an alternative, and perhaps no-cost, alternative to a big-name software app. I mean, people don’t reallyneed Photoshop to crop photos or Microsoft Word to write letters.

When I looked atAlternative To, they had56,519 apps in their database

Theirusers have liked those apps 548,199 times and they’vehad 278,380 opinions about theiralternatives, gaining713 new opinions and 307 new likes on the day that I looked. 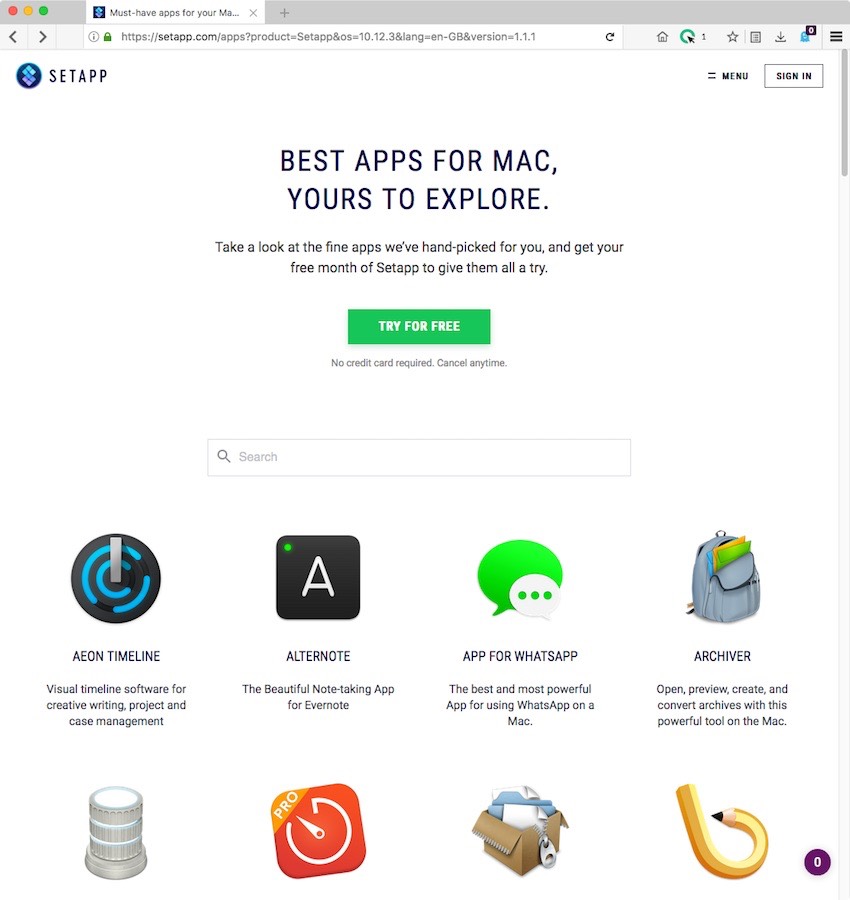 Setapp is a curated solution. It offershand-picked apps in one signup. Rather than a store of separate apps, Setapp is a subscription that allows you to install any number of apps from the selection.

Once you’ve signed up, the first month is free, browse the Setapp folder on the Mac and install only those apps that you wish to use. The monthly cost—currently $9.99—is the same regardless of the number of apps that you choose.

What’s more, there’s some big-names apps in there; the sort that would cost a lot of money if purchased individually. With software such as RapidWeaver, Ulysses and iStat Menus amongst the 68 apps available, Setapp is definitely worth a look.

No guide to Mac apps would be complete without a mention of ThemeKeeper’s Tuts+ Computing Skills website.

Here, you’ll find regular tutorials demonstrating how to use some of the best and most interesting Mac Apps available.

Browse through the tutorials and you’ll, no doubt, discover some interesting Mac Apps to enhance the way you use a Mac.

This is the site, for Windows apps,that inspiredmacapps.link and Get Mac Apps for the Mac.

A curated, up-to-date list of useful Windows apps, this site is worth noting for when setting up new Windows machines.

In this tutorial, I’ve highlighted a number of ways of keeping abreast of the wealth of Mac Apps available out there.