With the rise in popularity of Contactless and Chip&PIN payments, debit cards have overtaken cash since July 2017 in the United Kingdom.

Use a Smartphone to Teach Children Good Money Management

Piggy banks could be a thing of the past. Pocket money is also becoming cashless with debit cards being offered to children from eight to 18 years old and as young as six years old in one case.

The debit cards aimed at children and teenagers are prepaid cards, have no risk or possibility of going overdrawn and are all managed by an associated smartphone app in which a child can learn about good money management and budget for different things.

Parents also get an app from which they can restrict where their child can spend money, make regular and one-off payments and block the card if necessary.

In the UK, there’s three main offerings, each with their own strength, weaknesses and costs.

Originally known as PKTMNY (Pocket Money), goHenry is a prepaid Visa debit card that has been designed by parents for children as a tool to teach money management and financial independence.

Each child, between six and 18 years old, has their own debit card that they can manage through an app if they’re old enough to have a smartphone.

Parents manage their children’s accounts through an associated smartphone app and can control where the card can be used, make one-off or regular transfers, set tasks for children to earn pocket money, invite relatives to contribute and block or unblock cards should they become mislaid and subsequently found.

For peace of mind, parents receive real-time notifications on a child’s spending.

Nimbl is a prepaid MasterCard, for children aged eight to 18, managed via a smartphone app. Parents stay in control as their child learns how to spend and save responsibly.

Parents set spending controls to limit or shape how the card is used, relatives may gift money direct to a child’s card.

An interesting feature is micro-savings. By choosing an amount ranging from 5p-£5, every time the Nimbl card is used, the amount chosen goes straight into savings. Helping to find a good balance between spending and saving.

Osper helps teach children to spend and save their pocket money more wisely with a MasterCard debit card and an app to track spending and saving each month.

Parents use an app to set allowances, oversee children’s spending, load money for emergencies or if they’ve earned it, and lock the card in case of loss or theft.

With the Osper app, children can set up a regular monthly saving, based on a percentage of their allowance, that they can choose to save for a specific goal, or just save for a rainy day.

PrePaid cards aimed at children and teenagers are not unique to the United Kingdom. Firms operate in the United States offering similar apps and products to introduce children to managing money to install financial skills.

With a Greenlight MasterCard debit card, your child has what the company calls permission-based spending opportunities, or a green light. Parents may order a Greenlight card for a child of any age. If the child wishes to order one, they must be at least 13 years old due to Federal Regulations.

Children have money divided into two categories, as defined by a parent. Money that they can spend anywhere and money that can only spend at a particular store or type of store that has been approved in advance.

Greenlights are category-based or specific. For example, allow them to spend at any coffee-shop or a particular restaurant.

If your child is out shopping, and wishes to make a special purchase over and above the rules already defined, they can use the app to place a real-time request to the parent for additional funds. The parent chooses to approve or decline the request.

Parents can choose whether to be informed of their child’s expenditure, or when and where their card gets declined. Or when the balance runs low. Or any combination of these.

The alternative to PrePaid cards, and their costs, is a traditional bank account. Most banks offer these and, whilst they come with interest on savings, they’re unlikely to compete with modern digital challengers either with apps or with education. 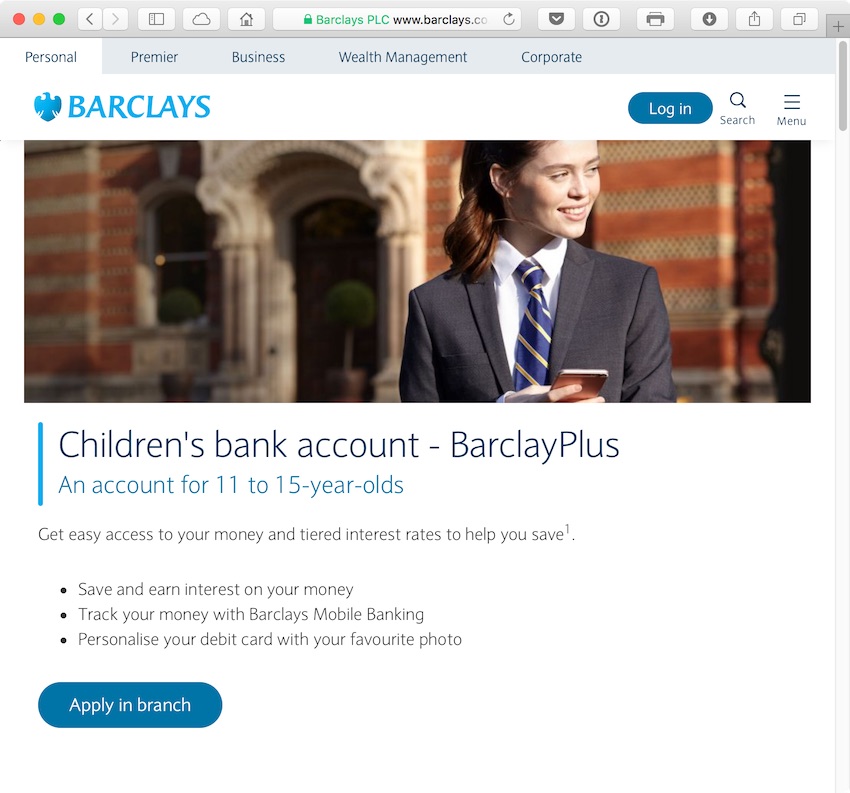 Barclays is one of the big four banks in the United Kingdom and offers a children’s bank account for 11-18 year olds.

Barclays offers an app so that the child can manage money on their smartphone, though this is limited to checking balance and statements, moving money between accounts and sending money to friends and family.

The account comes with a cash card for free ATM withdrawals of up to £50 per day, or a debit card with parents’ permission. Whilst the interest rates are extremely low, there is no annual cost to running this account.

Unlike the digital challengers, Barclays insists that a visit to a branch is necessary to open an account.

Society is moving from cash to card and it is important, now more than ever, that children receive a sound financial education to set them up for the rest of their lives.

Digital challengers are combining apps, education and debit cards so that children are empowered to make their own informed decisions.